The Patent Prosecution Highway (PPH) is a set of initiatives for providing accelerated patent prosecution procedures by sharing information between some patent offices. It also permits each participating patent office to benefit from the work previously done by the other patent office in a manner of maximizing mutual exploitation of search/examination results among the offices, with the goal of reducing examination workload and improving patent quality.

The PPH enables an application whose claims have been determined to be patentable in the Office of First Filing (OFF) to undergo an accelerated examination in the Office of Second Filing (OSF) with a simple procedure upon a request from an applicant on the basis of bilateral office agreements.

2. Pilot implementation of PPH program between KIPO and IP VIETNAM

Korean Intellectual Property Office (KIPO) and Intelllectual Property Office of VietNam (IP VIETNAM) have mutually agreed to commence a pilot PPH Program. The Offices may terminate the PPH pilot program for any other reason. Ex ante notice will be published if the PPH pilot program is terminated. The PPH pilot program will be in effect for two (2) years commencing on June 1, 2019 and will end on May 31, 2021. The volume of requests per year will not exceed one hundred (100) from each Office. This is Vietnam’s second PPH program, following a successful pilot program with the Japanese Patent Office (JPO). Quite similar to the JPO pilot, the program may be renewed after the two-year period review of the effectiveness of the PPH program. 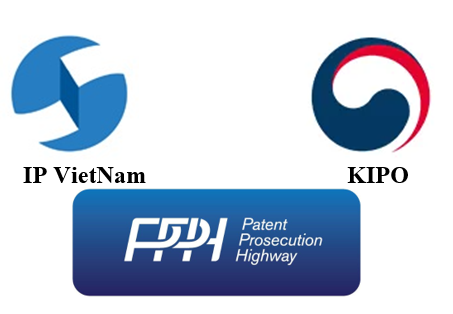 Applicants can request accelerated examination by a prescribed procedure including submission of relevant documents on an application which is filed with IP Viet Nam and satisfies certain requirements under the IP Viet Nam-KIPO PPH pilot program based on the KIPO application as outlined below.

(a) The IP Viet Nam application (including a PCT national phase application) is:

(i) an application which validly claims priority under the Paris Convention to the KIPO application(s), or

(ii) a PCT national phase application without priority claim filed at KIPO as receiving office (the application number begins with PCT/KR, hereafter referred to as “PCT/KR application”), or

(iii) an application which validly claims priority under the Paris Convention to the PCT/KR application(s) referred to in (ii) above.

Note: The PPH pilot program is NOT applicable on the basis of KIPO “utility model” applications.

(c) All claims on file, as originally filed or as amended, for examination under the PPH must sufficiently correspond to one or more of those claims indicated as allowable in KIPO

(d) IP Viet Nam has not begun examination of the application at the time of request for the PPH.

3.2. Documents to be submitted

Documents (a) to (d) below must be submitted along with the PPH request.

(a) Copies of all office actions (which are relevant to substantial examination for patentability in KIPO) which were issued for the corresponding application by KIPO, and translations thereof;

(b) Copies of all claims determined to be patentable/allowable by KIPO, and translations thereof;

(c) Copies of references cited by the KIPO examiner if the references are patent documents;

3.3. Procedure for the accelerated examination under the PPH pilot program

In practice, IP Vietnam issues the first Office Action in 9 months from the starting date of substantive examination period (half the time of the statutory 18 month period).

Note: PPH request can be submited, provided that there has not been any first office action at the time of the PPH request, and it will be considered as a new request.